I’m going out on a limb here but I’m pretty sure we have seen the last of snow.  We are still having some temperature dips to the low 30s but we have had some beautiful spring weather days.  The waterfall system has finally thawed and running as planned.  All the koi seem to be doing well, except for Cha Cha. Once again Cha Cha has been removed from the pond. Two trips to the skimmer and doing the side stroke around the pond doesn’t look good.  Not to mention he has some fin rot going on which worries me.

Tony (the digger) has been itching to turn over a few spadefuls of dirt.  With the help of his five year old nephew, they dug for about two hours last Friday.  Of course it was in the wrong spot and around 6:30 Saturday morning Tony was back out refilling the hole and resetting the flagstones.  The five year old was a little angry that all of his work had do be undone. I think the almost 55 year old should have checked with me first… Later that day he did get to do some digging in the right area.  Not much we can do on the new pond site until two large oak trees are removed.

The pond has slowly been clearing up as the bacteria works, eating up the sludge. It’s kind of like magic – one day you wake up and you can see almost to the bottom of the pond. We have also been busy cleaning some of the rocks around the edge of the pond.  Being married to someone who makes chemicals has its advantages.  Tony’s company is starting to manufacture a line of pond cleaning products.  I brought some home to test out on our pond and it works way better than the stuff I can buy in the stores.  Tony will be selling some products online in a few months (or was it weeks?)

The little baby koi from last year are a few inches long.  Not sure if they will develop any interesting coloring.  Three of them are mostly white with a little orange on their heads; one is mostly orange; two are speckled orange, black and white. I’ve read online that koi should get their color pretty early…or later on…or change colors a couple of times. Who knows what these will end up looking like.

I’ve ordered some pond plants for the koi pond and they should arrive this week.  Since koi tend to eat/destroy plants, my plan is to always reserve a portion to grow. Sounds like a good plan but I am not always the best farmer.  I have had mixed results with the vegetables we have grown in the backyard – microgreens indoors or in the raised growing box tend to be the only sure thing.  Most of the plants have ended up as deer food.  Maybe I should take a stab at aquafarming since I have the koi.

I have started posting photos of our 2014 pond site.  You’ll have to navigate using the sidebar menu to the 2014 page.  I have also added a page of short video clips I take around the yard. So while I may not always post on the blog page – there may be new things going up on the pond page 🙂 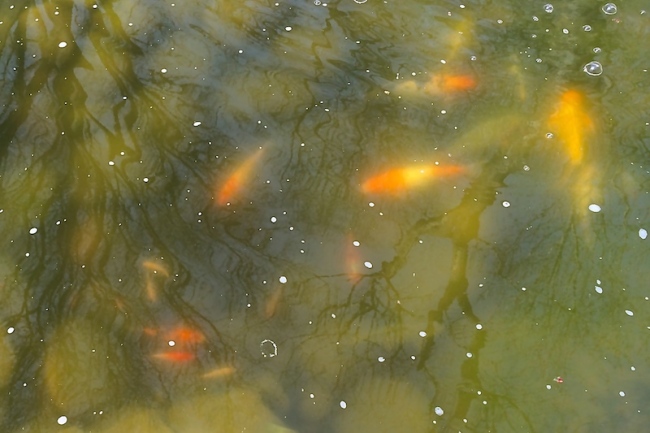