Since I last posted, I have traveled to Virginia, watched the Vikings miss out on the Super Bowl, heard a lot of celebs were in the area for Super Bowl (I did not see any), had a few inches of snow, a few days of a spring temperature tease, had a few days of really cold weather and saw some really beautiful koi photos posted after the All Japan Koi Show. Nothing too exciting to write about concerning my own koi. The winter pool is pretty boring and that’s a good thing.

The koi seem a little hungrier so I have increased the amount I feed lately. I generally feed them from one spot of the pool and they know to swim over to that corner whenever I am standing up on the bench. The koi will swim on top of each other and hit the wall as they eat the little pellets of food. I try to scatter the pellets but they all continue to eat as if they are starving. Some of the koi will make loud slurping sounds while they eat. 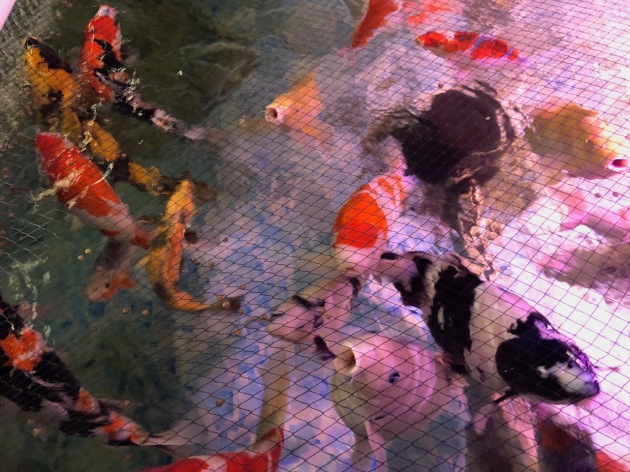 The pond builder has been taking care of the indoor pool with weekly water changes. The water parameters are good and the only thing I dislike is the brown algae that develops on the pool walls. The koi might be grazing on it a little bit but I really like to sweep the stuff to expose the blue checkerboard pattern. I think the koi look a little better against that background. When I sweep the algae it takes about three hours for the filtration system to clear up the cloudy water. The koi are not spooked at all by a broom sweeping up algae. If I have a net in the water, most of them are very suspicious. However, the koi have a sixth sense about the net. The ones who know they aren’t targets will swim very close to the net and the targets will stay far away.

Here’s what the koi look like against the brown algae background:

And here’s what they look like against a nice clean background:

I wrote that a boring pool is good but something always happens. I have a little goshiki named Manolete who has somehow managed to injure his head. He has a rather large divot on a deep beni portion and unfortunately I don’t think this koi will ever have the beni come back in this area.

We took him out of the winter pool and placed him in the quarantine tank we have running. While the divot shows no sign of infection, it’s best to keep him some place where he can be easily caught and treated.

Marilyn and Monroe are my two ugly kuchibenis who will most likely never amount to much. Monroe’s beni looks like it will break up some day and both are really not that attractive. Except that they are kuchibenis. I’ll hang on to them for a little while longer. M&M are also big time pouters. When they were the only two in the quarantine tank, they would just sit in one corner or another and look miserable. I’m not really sure what the problem was – maybe they felt like they were exiled. As soon as I put Manolete in the tank with them, they were very excited and perky. They latched on immediately and swam around – totally different koi. No more depressed koi. Speaking of depressed koi, I’m wondering if giant Poppy in the large pool is a problem child. She’s been having some days where she hangs out in the corner by herself. …

Here’s a little video of the unfortunate divot and the happy little kuchibenis swimming with Manolete. These three koi will most likely be rehomed this spring. For now I’ll use them to maintain the QT filtration system for the new koi that will be shipped to me in April.

A few more weeks of boredom when it comes to koi but it’s the start of koi shows around the country. There are lots of koi shows that I would like to go to, but I need to pick and choose based on flights and my work schedule. (In real life, I work for my pond builder’s chemical manufacturing company.) This year I plan to go to ZNA NorCal since I’ll have two cute little tosai from Japan to show and I am sure there are some great places to eat ramen in San Jose. Eating ramen is another thing that I really like to do – almost as much as keeping koi 🤣. I have a foodie niece in the area who will know where to get some. I’ll probably spend a few hours at the Michigan Koi Show because I’ll be attending a wedding not to far from their venue that weekend. Haven’t thought too much about any other shows since I will be busy co-chairing my home club’s annual koi show in early August.

The only other winter pastime is hand feeding the koi and filming them up close with the GoPro. It’s actually gotten a little harder to film them underwater because they think the camera is something to eat. In this video, you’ll see the koi taking some Manda Fu from my hand. I’m always tickled when they do this since they will never do this once outdoors.