It’s a pretty cold day outside – maybe in the low 50s. Little Siberian weather is challenging. The pond builder always needs a project so today he decided to reroute the auto fill line to the lower pond, fiddling with something electrical to the pond, burying some drain lines, leveling more ground and planting seeds, at least two trips to the hardware store – he’s very industrious. I’m more of the indoor type when it’s chilly so I have filled my day with work to get ahead and being distracted by koi topics. Since I will be participating in my second show as a member of the judging team, I thought I would do some more studying. It’s not going too well.

Far more interesting is to think about koi development. Our oldest koi is a showa named Irene. She was a $50 little tosai from Koi Acres and we have always liked her. When she first came home she would swim and get wedged in the rocks head first. Maybe she didn’t realize how fat her head was. Irene has always been a good eater, pleasant temperament and always wants to be caught. If you put a net in the water, she will often swim into it. Over the last five and a half years, she’s put on some nice girth and is almost 26 inches in length.

Irene and Moriarty came home in a 2 gallon bucket. Moriarty disappeared and we suspect that something probably had him for snack.

You can see that Irene lightened up to a paler orange looking beni during the first two years. I always thought the summer sun was making her fade 😂.  At two years old, her beni begins to darken back up.

The sumi on her head begins to form a pattern. She also has some hi in her pectoral fins.

Sumi and beni both continue to get darker. At five years old, she’s starting to rock some motoguru in her pectoral fins. 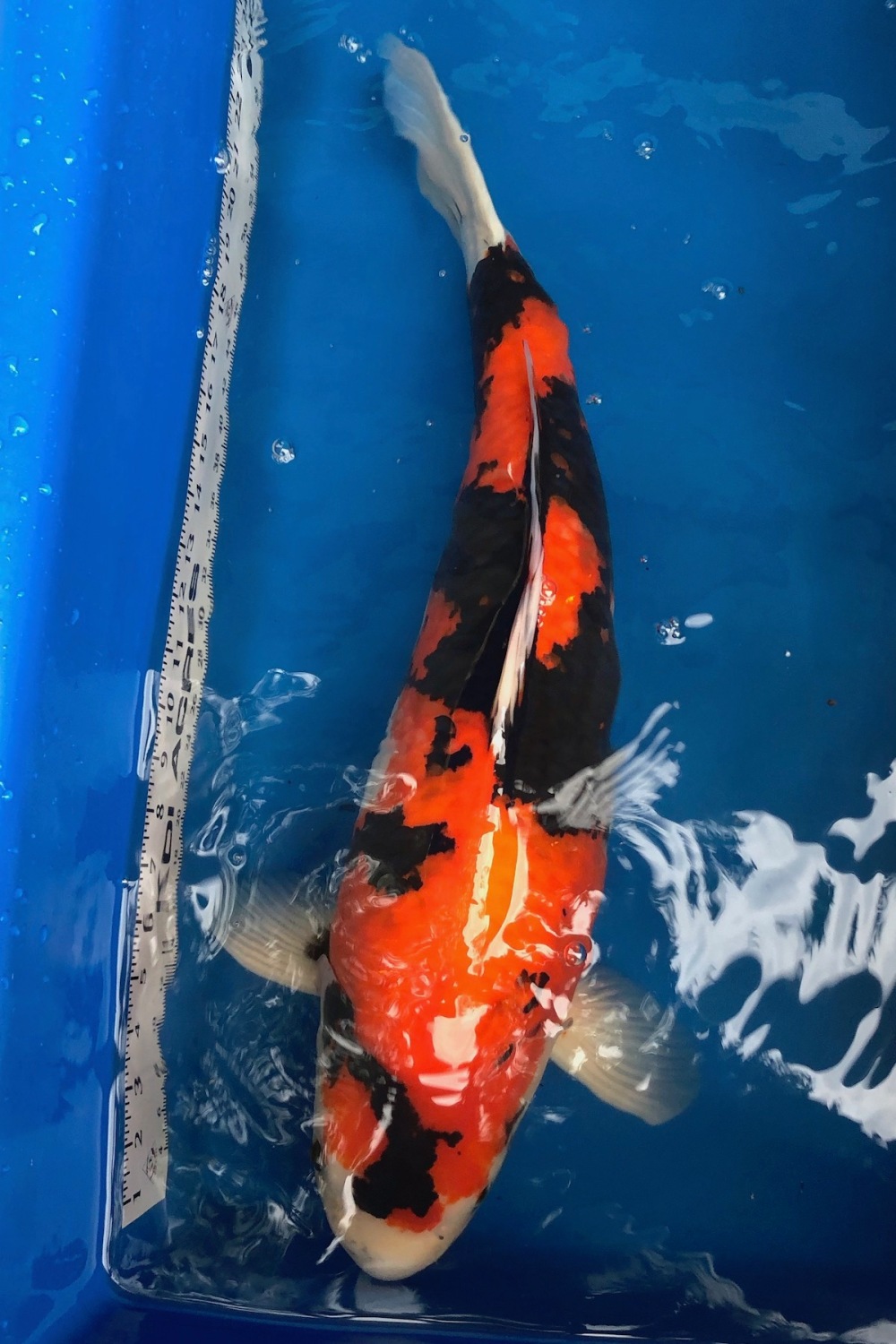 In 2016, I purchased a number of shiro utsuris to watch their development. Since they can be a long term process, I thought I’d pick another type of koi to watch – the showa – also a long term process. Unlike the shiro utsuris, I’ve been getting the showas one or two at a time. Abbott and Costello came in early 2017. I had to rehome Costello because the beni fell apart within a few months. I picked Abbott from GenkiKoi because she was fat, good body, looked strong and was the nice deeper red that I prefer. In person, the white was pure and lovely.

Abbott was a fast grower and after Costello’s beni broke up, I was a little concerned because Abbott’s beni was getting lighter. I showed photos to many koi friends and they all agreed that the hoshi promised the return of beni that I liked. Let me just say that Abbott looked decidedly carrot orange to me.

After another year looking more orangey than red, Abbott’s beni is finally filling back in to that deeper red. If people had not told me that this could happen, I might have sent Abbot on her way. Instead I’m watching as we enter year 3.

We spend a lot of time planting things that we can walk on. I love gravel paths but if you are running outside barefoot, it can be painful. For color, coolness and a pleasant smell – we fill our path steps with Irish moss, scotch moss, creeping jenny and wooly thyme. These plants take a beating and come back every year.

I am also a fan of moss. While we were in Japan, we visited parks where the entire ground was covered with moss in lieu of grass. I have a little too much sun here but working on getting some large scale moss patches into the garden. Very easy to grow moss on the waterfall rocks. I harvest moss from different areas of the garden and move it to other spots hoping it will thrive. Some spots are more successful than others. Luckily the retaining wall of our upper garden is like a moss farm.

Hosta is another fun plant with infinite varieties. It’s also a favorite of deer and I wish they would go after hosta instead of tender trees and bushes, tulips and lilies. Hosta grows like a weed, extremely difficult to kill and we have thrown plants under lilacs where they just root themselves and grow. I’m a fan of the variegated varieties. 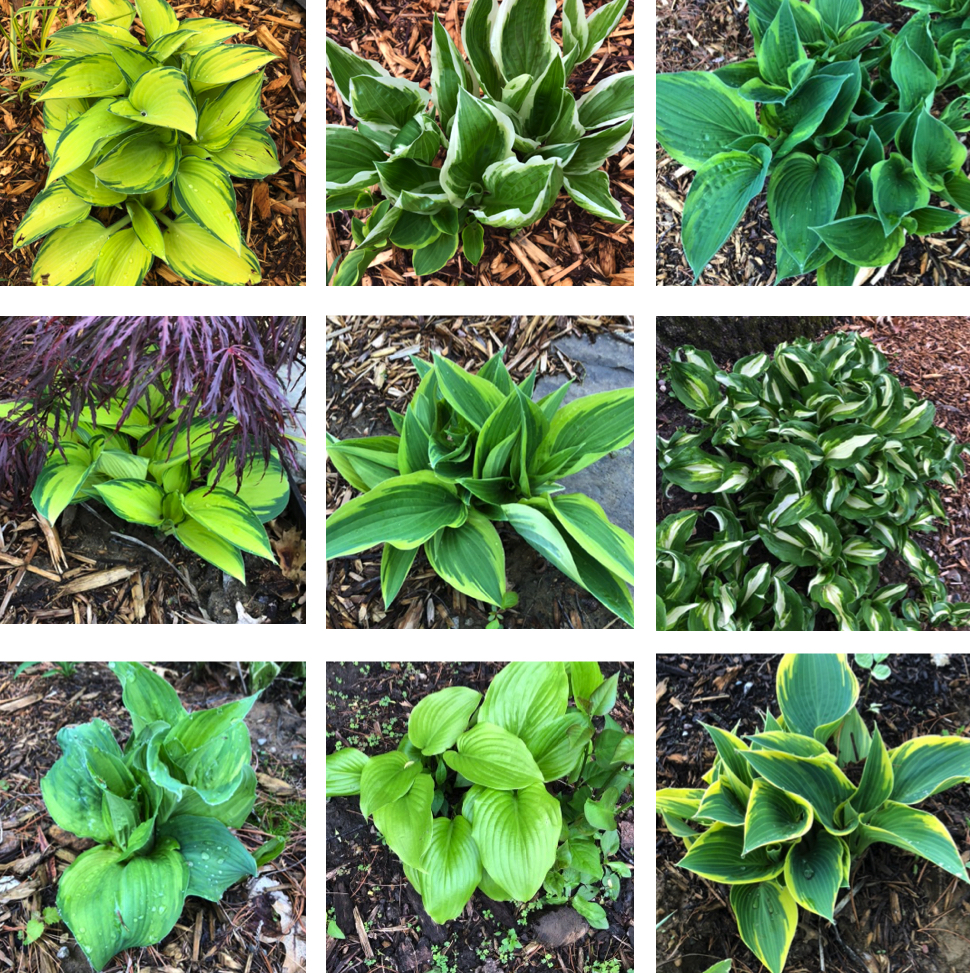 When we purchased our home in Little Siberia, the backyard was a delightful shaded oak and hosta garden. We had large clumps of hosta all over and of course a ton of mosquitos. We thinned out the hosta by selling much of it on Craigslist, sharing with friends and just leaving it on the street edge, hoping some neighbors would cart it away.

I’m supposed to be searching for some historical work files but found this photo of our old garden instead. What a difference. I do prefer the koi pond 😊. Time to get back to work and studying – in the next few weeks the peonies will start blooming and I’ll have to get the dahlia tubers in the ground. Gardening never ends…. 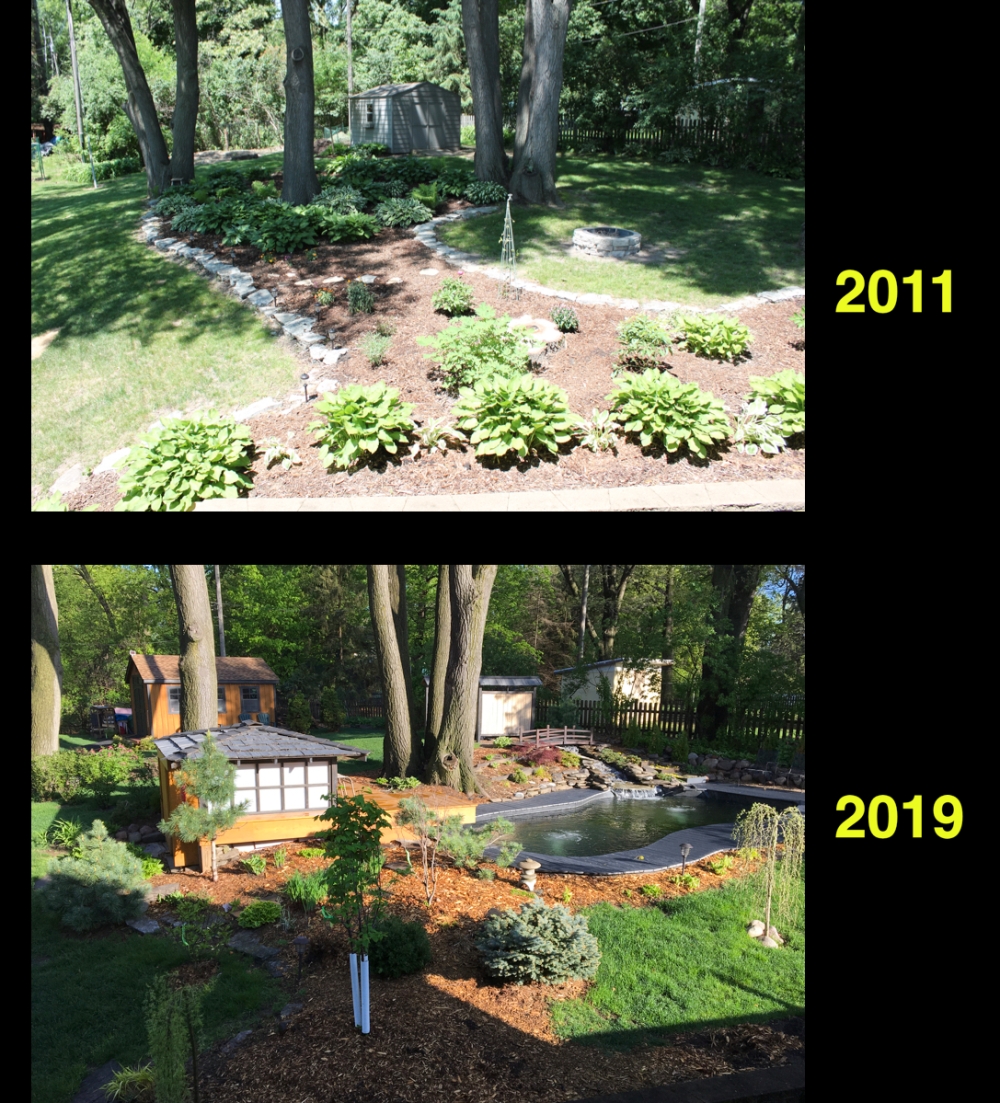